SPECIFICATIONS OF R22 FLOODED SYSTEM TO BE CONVERTED 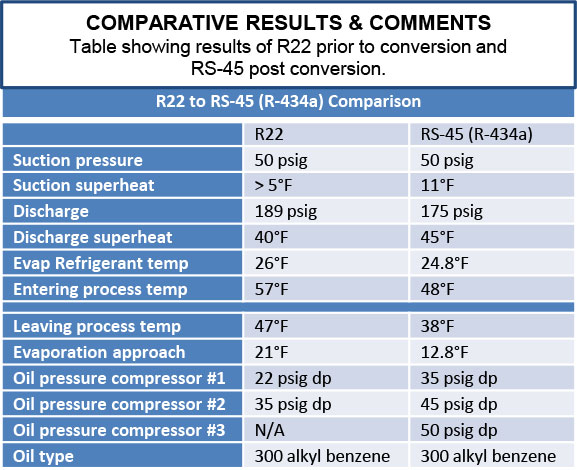 Initial start-up: At the initial startup after conversion, the system was not exposed to significant load conditions. A steam heat exchanger was utilized to simulate minimal heat load conditions. Each compressor was started and allowed to carry the load independently. All compressors performed load demand tasking with exceptional performance operation. Each test resulted in a low discharge pressure of 160 PSI. Suction pressure was easily achievable at 50 PSI and oil pressure was ranging from 45 lbs. to 65 lbs. DP. At that time, compressors were run under low load conditions.

Day 3 of testing: Load requirement demands were increased to normal operating conditions of system requirement.  Upon exposure to additional heat load requirements, the increased amount of suspended vapor dropped the liquid receiver level to below desired level. An additional 500 lbs. of RS-45 was added to meet the demand requirements of the normal operating conditions (heat load demand). Due to the low ambient conditions, the system still operated with relatively low discharge pressure of 175 PSI. Suction pressure was still easily achievable at 50 PSI and oil pressure DP was achievable. The approach on the evaporator dropped to 10°F (from 15) due to a lack of excessive oil in the evaporator. Furthermore, it appears that the retrofit should be considered easily achievable and the outcome should receive satisfactory results. Also the close pressure temperature relationship characteristics would not require substantial PLC control modifications or PSV replacement.

BENEFITS OF RS-45 (R434A) OVER OTHER ALTERNATIVES

Since RS-45 (R434A) is compatible with all refrigeration oils, including mineral oils, installations using this lubricant do not need to move to a POE, which would have been necessary with R404A, R507, R407C or R427A, thereby reducing the conversion time, cost of oil, emergence of new leaks and the constraints imposed by the use of very hygroscopic lubricants.

RS-45 (R434A) low temperature glide of 3°F enables the system to be directly charged with RS-45.  From a technical standpoint, there is no need to remove the remaining refrigerant because no fractionation of the mixture would occur as would happen with R404A and R507. However, good practice protocol and EPA guidelines call for refrigerants not to be mixed.

RS-45 (R434A) achieves good condensation and it is therefore unnecessary to change the condensers or make any changes in this regard as would be the case with R404A and R507.

Owners can continue to use an A1 safety classification product, thus avoiding toxic or flammable chemicals like ammonia and hydrocarbons, respectively, which, amongst other things, also requires a major overhaul of facilities.